I was not expecting the elements of this book to be what they were. In other words, I was expecting a heist that took place in Paris in 1889, not a book about people who have the ability to forge objects through manipulating elements. Actually, I might even go so far as to complain that the story really didn’t need to take place in Paris at all because it didn’t rely on any Parisian elements.

Forging, as it is in the book, is an interesting concept that served as a way to drive the plot forward. I don’t understand why the summary of the book didn’t include a description of it. While I don’t mind a realistic fantasy novel, I found myself longing for the story that was described on the back of the book. The one that exists without magic.

Additionally, this book felt as though it was trying to check a lot of identity boxes without incorporating the identities into the story. This reminds me of when JK Rowling decided to go back and fill her readers on information about her characters that weren’t explicitly said within the narrative (ie Dumbledore being gay) because it feels as though the reader took the opposite approach. Instead of building characters through the reader’s experiences with them, Chokshi just told you “this person is Jewish” or “this person is bisexual”, leaving me torn in my feelings. On the one hand, I want those populations to be incorporated into stories. On the other, I want those characteristics to reflect the character who has them. I was told Enrique struggled on the fact that he was attracted to both men and women, but how much better would it have been to listen to his internal dialog? Especially considering the location of this book is 1889 Paris?

All in all, this is a book I would put into the “passible” category. I read it cover to cover, without feeling the need to abandon it, but it didn’t really engage with me until Tristian was kidnapped. Even then, this novel felt very formulaic. Frustrated, I read the review from NPR and found myself wondering if we read the same book. I didn’t read a book rich with detail, I read a book that told me instead of showing me what was happening. I’m left feeling a little frustrated by this read, frustrated and left wanting things flushed out.

For April, possibly in honor of April Fools, I thought it would be interesting to read The Night Circus by Erin Morgenstern. It’s been on my “to-read” list for a while, the cover and description appealing to my inner child. This book reminds me of the Cirque De Freak series that I couldn’t put down in middle school. Although, probably minus the vampires. 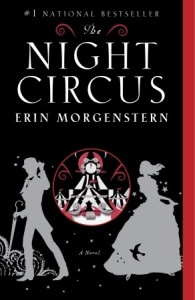 The circus arrives without warning. No announcements precede it. It is simply there, when yesterday it was not. Within the black-and-white striped canvas tents is an utterly unique experience full of breathtaking amazements. It is called Le Cirque des Rêves, and it is only open at night.

But behind the scenes, a fierce competition is underway – a duel between two young magicians, Celia and Marco, who have been trained since childhood expressly for this purpose by their mercurial instructors. Unbeknownst to them, this is a game in which only one can be left standing, and the circus is but the stage for a remarkable battle of imagination and will. Despite themselves, however, Celia and Marco tumble headfirst into love – a deep, magical love that makes the lights flicker and the room grow warm whenever they so much as brush hands.

True love or not, the game must play out, and the fates of everyone involved, from the cast of extraordinary circus per­formers to the patrons, hang in the balance, suspended as precariously as the daring acrobats overhead.

Written in rich, seductive prose, this spell-casting novel is a feast for the senses and the heart.